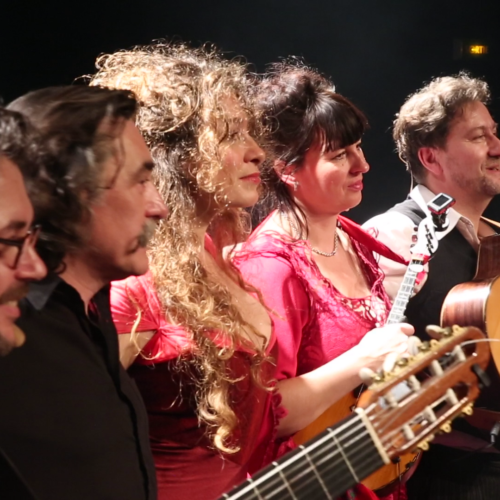 Natacha & Nuits de Princes is a Russian and Gypsy music group.
Comprised of five virtuoso instrumentalists, this group interprets songs written by Natacha Fialkovsky (vocals and balalaïka) and arranged or composed by the group’s guitarist and artistic director Olivier Cahours. Its generous arrangements give each instrument (Natalia Trocina’s Russian domra, Thierry Colson’s double bass, and Pascal Storch’s classical and steel string guitars) a unique suave register.
Over the years, Natacha & Nuits de Princes has settled into the maturity of an identifiable group sound, highly appreciated by critics. Their discography of four albums offers a captivating sound that immediately takes you to the East, from the Balkans to the Urals, with Natacha’s enveloping voice.
Their music is often used in film soundtracks such as the short film Zapoï by Vladimir Tchernine with Edouard Baer, Rire et Châtiment by Isabelle Doval, Hell by Bruno Chiche, and Kiss & Kill by Robert Luketic, as well as the Shameless series.