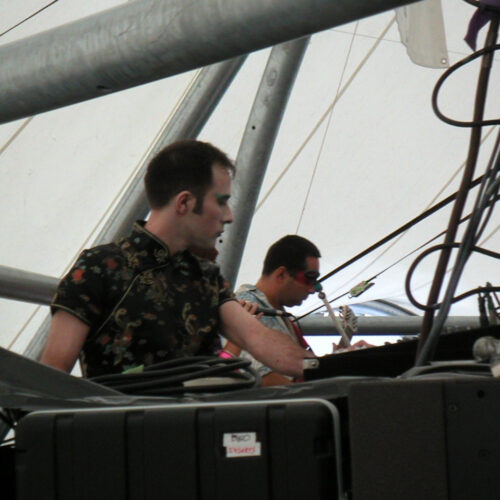 Les Dupont is an electronic music duo formed in the 90s and considered as one of the French Touch’s founding bands.
In the same vein of eclectic artists such as Aphex Twin or Orbital, the compositions of Didier Blasco and Frédéric Apostoly borrow from every style. From the darkest hardcore (they notably collaborated with Manu Le Malin on the Hardcore Fever Extreme Ep) to the most festive house (their tracks have been playlisted by Kenny Larkin, Rosco, DJ Morpheus…).
Miracle (1996), their first album, is described by critics as “intelligent dance music à la française.” Since then, fifteen albums have been recorded, and their live sets mobilize sound and visual perception. Accompanied by images from underground films, they consistently create an intense and unique atmosphere.
In 2017, their cover album Looking Through, along with the singles Cold Song, Fade To Grey, and Full Moon Boogie, climbed to the top of the European iTunes charts.
They also have significant experience composing film music, acquired, among other things, through the films directed by Didier Blasco. Les Dupont also composes music for contemporary art (installations by Brice Dellsperger at the Villa Arson,…).