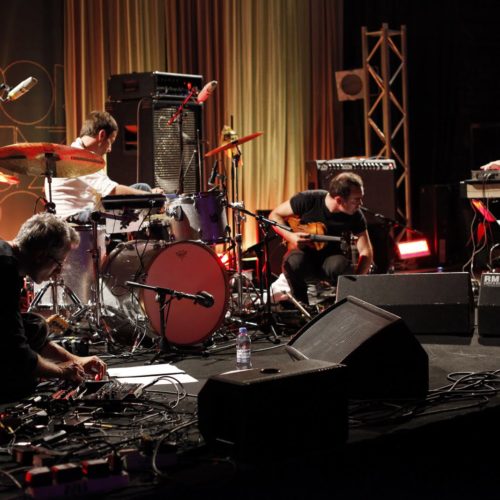 Since 2004, the band Caravaggio formed by Benjamin de la Fuente, Bruno Chevillon, Eric Echampart and Samuel Sighicelli, keeps on developing a hybrid music, drawing their inspiration from rock, contemporary music, electronic music and jazz.
Above all, the band refuses to belong to a single aesthetic in order to preserve their freedom and emphasize an open dialogue between several languages.

Caravaggio’s music reflects the multiplicity and complexity of today’s world. Fascinated by the relationship between music and images, Caravaggio had notably composed the score of «L’Amour est un Crime Parfait» (by Jean-Marie and Arnaud Larrieu, 2013), which also became concerts-film.
Their music is also used in numerous audiovisual works and contemporary art installations.