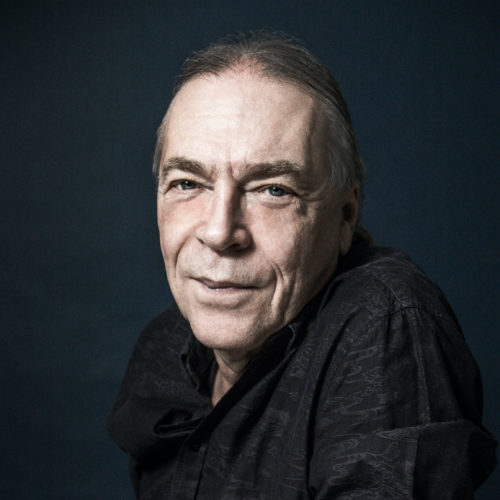 René Aubry is a contemporary classical music composer and multi-instrumentalist.

He composes for himself, above all, and a whole lot for dance, theater, and cinema. An eminently solitary artist, both a creator of atmospheres and inspired melodist, René Aubry is a freedom-loving researcher whose works exude distinctly recognizable originality and color.

He began his career by collaborating with choreographer Carolyn Carlson. Together they created numerous shows, including “Blue Lady” (1983), “Steppe” (1990), and “Signes” (1997), which was crowned by a Victoire de la Musique in 1998. In Venice, where he lived from 1981 to 1984, he recorded his first album. This was followed by 27 more albums between 1988 and today, including his last one, “Petits Sauts Délicats avec Grand Écart.”
The enormously talented choreographer Pina Bausch as well found joy in his music, which accompanies three of her shows: “Ten Chi” (2004), “Vollmond” (2006), and “Sweet Mambo” (2008), as well as the theatre director Philippe Genty in several of his creations.
Film directors also use his music: Wim Wenders for his film “Pina,” Paolo Sorrentino for his film “L’Uomo In Più,” and Marco Bellocchio in “Le Traitre” among many others.

Since 2009 he also composes soundtracks of animated films produced by the BBC: “The Gruffalo,” “The Gruffalo’s Child,” “Room On The Broom,” and “Stick Man.” Each time, the 4 films have been awarded the Crystal prize for best TV production at The Annecy International Animation Film Festival. René Aubry also received the 2017 Kidscreen Award for Best Music for “Stick Man” and composed the soundtrack for Lorenzo Mattoti’s film “The Famous Bear Invasion in Sicily” in 2019.