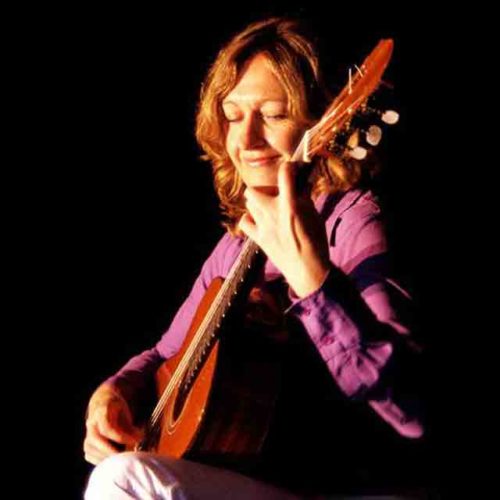 Fabienne Magnant is a classical guitarist and composer. She mainly plays classical guitar, flamenco, and viola caipira, reflecting the style of her instrumental compositions with classical, Brazilian, and Andalusian influences.
After a long trip to Brazil in 1993, she recorded her first album, “Mémoire Vivante – Brésil et musique du 20ème”. Then she created a duo with Paul Mindy (percussions), with whom she recorded her second album “Canto Instrumental” in 1998.
In 1999 Fabienne left for the Northeast of Brazil, to Salvador de Bahia and then to Recife, which inspired the creation of her 3rd album and show “Le Sens Des Sens.” She brings back a viola caïpira, a five-string double metallic guitar emblematic of Brazil, which will become the privileged instrument for her artistic creations.
Her last album, “La Trinidad” (2011), was elected the “Coup de Coeur” prize by the newspaper Muzika.